Renkon! sounds like the name of a monster in a big-budget movie – maybe the Rancor from Return of the Jedi mixed with KING KONG? Run for your life! Get out while you can! The RenKON IS COMING! 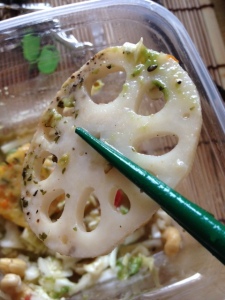 But it turns out, renkon is just the Japanese name for lotus root. Yes, that lotus, the flower of which, along with the ohm symbol, took the tattoo market by storm in the late 90’s. I recently visited the gardens at the Heian shrine, where there is a large and quite famous pond full of lotus (it’s the one Scarlet Johansson hops across in Lost in Translation). As calming as a pond of lotus can be, it’s nice to know that beneath the murky pond mud lie hundreds of edible vegetables. When sliced, renkon has a distinctive honeycombed look, with many small holes that look like spokes in a wheel. It adds crunchy, delicious texture similar to watercress, and remains crisp even when fully cooked.

Because lotus grow in ponds, they’re often sold covered in a residue of dark mud at the store. This can be easily washed off in the sink. To cook the renkon, wash and peel the outside. Cut the renkon into thin (less than a half centimeter) slices, and then maybe cut the slices in half to make half-moon shapes. Sometimes I don’t do this; it probably makes them harder to eat, but I think a round slice of renkon is pretty cool-looking. 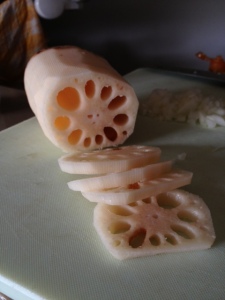 You can add renkon to stir fries and salads, but I personally prefer it as a grilled or sauteed side dish. Renkon sauteed in mirin and soy sauce is sometimes called kinpira, though I think the word refers more to the way it’s cooked than the actual inclusion of lotus root. Here’s a “Western-style” take on lotus root with mushrooms and carrot.

Ingredients: It’s difficult to give precise amounts – just make however much you want to eat.

Carefully take out the hot foil package and check for doneness. Serve alongside your favorite main dish. RAHH, RENKON!

One thought on “Renkon!”